Ever wonder what BP and other foreign companies were doing drilling U.S. oil in the first place?  Ever wonder why some of the bailout money went to foreign banks?  National bounaries have become a myth the rich impose upon the poor.  As long as we believe in separate flags and religions we can be played against one another  The rich themselves fly above nations, and above the law of any nation.  Meanwhile, they send the poor to fight and die over invented regional causes. They profit no matter who wins or loses. This madness will continue until enough of us realize that we are one species, and reorder the world accordingly.

The following article is taken from Mother Jones. 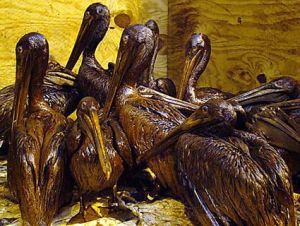 Back at the height of the massive Gulf oil spill in 2010, there was quite a bit of controversy about just how much crude was blasting out of the well. According to new documents that a watchdog group released on Monday, there was heated debate among the scientists who evaluated the flow rate as well.

For the first few weeks after the spill began in April 2010, BP misled the public about how big it was, and the government repeated BP’s estimate without question. And when the government released its own estimate in late May of up to 25,000 barrels per day, that too was controversial—and proved to be far lower than the actual size, which was more like 53,000 barrels of oil per day.

Now, an email released by Public Employees for Environmental Responsibility (PEER) traces efforts to downplay the spill size in the initial weeks back to the White House. The group released a May 29, 2010 email from Dr. Marcia McNutt, the director of the US Geologic Survey and head of the government’s Flow Rate Technical Group (FRTG), that was released in response to a Freedom of Information Act request. The email came after scientists on the flow-rate team complained to McNutt about how the spill figures were conveyed to the press, and in response she cited pressure from the White House as the reason the numbers were low-balled. Rather than reporting that the lower-end estimate of the spill was 25,000 barrels per day, officials cited that figure as the higher-end estimate:

I cannot tell you what a nightmare the past two days have been dealing with the communications people at the White House, DOI, and the NIC who seem incapable of understanding the concept of a lower bound. The press release that went out on our results was misleading and was not reviewed by a scientist for accuracy.

McNutt’s email reportedly came in response to complaints from scientists on the team about how the flow rate had been handled. PEER also filed a complaint against Dr. William Lehr, a scientist at the National Oceanic & Atmospheric Administration (NOAA) who was the team lead for the FRTG’s plume analysis team. PEER argues that Lehr “manipulated the scientific results” of the team’s experts and understated the spill rate in what it communicated. From PEER’s release on the complaint:

Lehr was leader of one of the most important FRTG teams, the “Plume Team” which analyzed videos of the oil leaks to produce the first estimates.  Three of the 13 Plume Team experts used a technique called Particle Image Velocimetry (PIV) to estimate a leak rate in the range of 25,000 bpd.  But three other experts on the Plume Team reported that PIV was underestimating the size of the leak by more than 50%. Those three experts used a different technology to correctly peg the leak rate at 50,000 to 60,000 bpd.

Yet Lehr did not tell the public or key decision makers that there was a deep split on the Plume Team.  In the Plume Team’s Final Report, the body of which Lehr wrote, he reported that “most of the Plume Team used PIV” which produced “consistent and accurate” estimates.  These underestimates were repeated to the public and media.

The government was also criticized for its handling of an August 2010 report on where the oil went, for which Lehr also served as the lead scientist. (I’ve requested comment from NOAA and the White House, and will update this post to reflect that when I receive it.) UPDATE: Scott Smullen, a spokesman for NOAA, said it is “not appropriate to comment” on this matter because it is still in litigation.

It’s not entirely clear from PEER’s release, though, what was real reason for the inaccurate figures—a single scientist giving inaccurate information, the White House pressuring him to do so, or the White House screwing up the reporting of the figures. Whatever it was, it resulted in the public getting a dramatically inaccurate impression about the size of the spill.