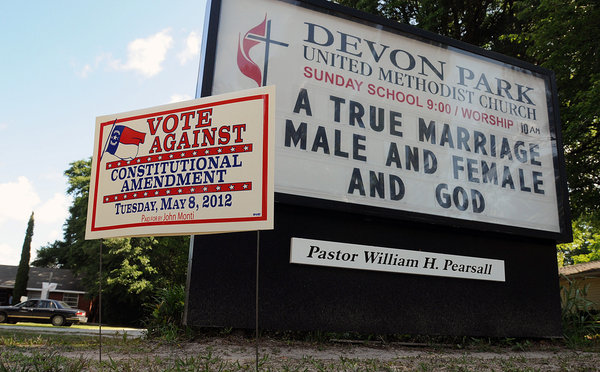 The above picture is what it looked like at one voting place. A church site telling people how to vote as they entered. At the end of the day North Carolina, which already bans same sex marriage passed an amendment that may come back to haunt heterosexuals as well.

The new amendment reads, “Marriage between one man and one woman is the only domestic  legal union that shall be valid or recognized in this State.” So many heterosexals flocked to the polls not realizing they had opened up a generation of lawsuits in domestic partnerships and civil unions. Eager to keep same sex marriage they didn’t realize the wording applied to many heterosexual relationships as well. That’s the way it goes. When you write a law to oppress any one group, you have given the state leverage to oppress you as well.

To read N.Y. Times article on this subject, click here.